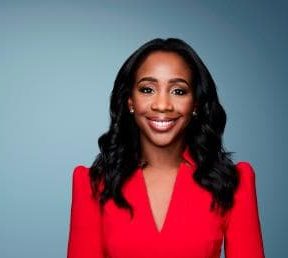 Abby Philip is an American media personality serving as CNN’s senior political correspondent and anchor of Inside Politics Sunday she previously served as a White House correspondent. Prior to joining CNN she worked as a national political reporter for The Washington Post.

Abby is an American national.

She belongs to Afro-Trinidadian descent.

Abby holds a Bachelor of Arts degree in Government from Harvard University. While at the university she wrote for The Harvard Crimson.

She is the daughter of June C. Phillip and Carlos W. Phillip of Bowie, Md. Her father is the psychology program manager for the District of Columbia Public Schools in Washington, while her mother is a Realtor and real estate investor with Fairfax Realty.

Abby is married to Marcus Glenn Richardson since May 26, 2018. The couple first met in 2011 at a mutual friend’s party but they did not exchange contacts at the time. The same friend organized another party a month later where they met again and eventually began dating and eventually got engaged in December 2016.

Richardson is a managing consultant at nVisium, a web and mobile app security company. He has a Bachelor of Arts degree in International Affairs from Florida State University.

Abby has a daughter named Naomi Angelina Richardson who was born on August 16, 2021. Her first name means ‘pleasant one’ while her middle name is a tribute to Abby’s maternal grandmother who passed away in 2014.

Abby is CNN’s senior political correspondent and anchor of Inside Politics Sunday, an hour-long in-depth conversation on the week’s most important political storylines, with a diverse set of analysts and news-making interviews. She joined the network in 2017 as a White House Correspondent through 2019.

In January 2020, she moderated CNN’s Democratic Presidential Debate in Iowa. She received a lot of backlash for raising the issue about Sen. Bernie Sanders reportedly telling Sen. Elizabeth warren that a woman can’t win the US presidential election during their meeting in December 2018.

She also anchored special coverage of Election Night in America surrounding the 2020 election, which lasted several days until CNN was the first news outlet to project Joe Biden as the winner. In January 2021, she anchored the CNN Special Report: Kamala Harris: Making History about the Vice President’s barrier-breaking career and the childhood experiences that helped shape her.

Abby joined The Washington Post in 2014 as a writer but was later promoted to the position of a general assignment reporter. She covered domestic and international news including the tragic Charleston, S.C. and San Bernardino massacres.

She later became a national political reporter, covering the White House. She wrote on a wide range of subjects related to the Trump White House, including efforts to repeal and replace the Affordable Care Act, the president’s overseas trip to Poland and Germany for his first G-20.

She began her career in journalism as an intern at ABC7 News. She later joined POLITICO where she served as a political reporter for the White House. She covered the Obama White House for POLITICO as well as campaign finance and lobbying. In 2012 she joined WJLA-ABC7 News until 2014 when she joined The Washington Post.

It’s a socially distant debate night and we are ready!!! Tune in! @cnn